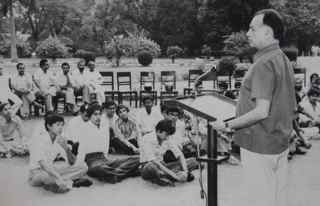 The Trustees shall hold office initially for a period of five years.

The initial Principal Trustees are:

KSG was in school the full course, i.e. 1961-1974. He was the Co-Curricular Prefect. In the Founder's Day of 1973 he was awarded Academics Prize (Commerce) for S-4, Chief of the Army Staff Trophy, Jamshed Shroff Prize for Elocution and Debating and Riding Colours. He was also in the School Hockey Team. In the 1974 Founder's Day he was awarded prizes for coming IXth in the All India Higher Secondary Examination (Non Science Group), Prize for standing Ist in Commerce Group in school and the Rudra Prize.

Kanwaljeeet completed his Chartered Accountancy after finishing B.A.(Hons.) in Economics. Kanwaljeet is the Managing Director of Nippon Audiotronix Ltd., a leader in the field of Automotive Audio and Electronics Equipments. The company feeds the OEM requirements of many car companies besides being a leader in the open market. It has brought to India and continues to be the exclusive distributor and licensee for Kenwood Corporation, Japan . He is involved in social work and is the founding trustee of Goindi Family Trust.

After passing out of Modern School, Rashmi earned her B A degree in Eco (Hons) and this was followed by LLB from the Faculty of Law, Delhi University.
Besides pursuing her career as a practicing lawyer in the Delhi High Court, Rashmi was always involved with the performing arts. She excelled in Bharat Natyam and Kuchipudi. She has earned several awards for her dance performances. She has performed extensively in India and Abroad and continues to do so even now.
Rashmi been performing on stage plays for the last 35 years. Natural extension of stage was TV. She has acted in innumerable serials. Many plays won the best Play of the Year Award By Sahitya Kala Parishad.
Actively involved with MSOSA for 36 years and completed many projects in tandem with the school.

Rajkamal was one of the consistent performers in academics at Modern School, besides being a member of the school badminton team and passionate performer at the school plays. He graduated in Economics Honours from St.Stephen’s College and then took a MBA degree from the Faculty of Management Studies, University of Delhi. Rajkamal has been a specialist in International Trade for the last 30 years having worked in two of the top Multi National Corporations of the world. He has a penchant for getting people together and has been instrumental in garnering support for the MNK Trust.

Anmol was the president of the Modern School Photography Club and was in the school Table Tennis team. He went on to be an Aerospace Engineer and a Commercial Pilot. He also did an MBA from Pepperdine University, California. He has worked across continents in several Engineering and Management positions. He has also been an Entrepreneur and founded several Technology Companies. He is actively involved in Mentoring other young entrepreneurs.He is the founder and CEO of Gadgets.in

Lalit followed the philosophy of MNK “a sport well played, a hobby well enjoyed and a first division “ Academically he was consistently in the top 5 of the class, was part of the school football and athletics team and actively involved in house functions and school cultural activities.
After school , he did Eco (Hons) from St.Stephen’s College and graduated with a high first division. Thereafter , he started business and took up distribution of Hindustan Lever Ltd. He is firm believer of “educating the gilr child” and is actively involved in management of one of the oldest girls school of Delhi (105 years old).

Sanjeev was the House Captain of Shivaji House and was throughout a consistent all round performer in Modern School. He was awarded the Jamshed Shroff Prize for Elocution and Debating (English), Dramatics Prize (Hindi), Table Tennis Colours, and the Rudra Prize for the best all round student besides attaining a high academic score in the School Board. He was a top ranked Delhi State player in Table Tennis, and went on to represent College, University and State. After graduating in Economics Honours from St Stephens College, Delhi University with a high academic score, he qualified as a Chartered Accountant from India (FCA), and rounded this off with a LLB degree from Delhi University.
Sanjeev is a practising Chartered Accountant, and as an advisor to companies across sectors including the entertainment and media sector, he provides advice on business plans and strategies, corporate finance and transition during growth cycles. He specializes in accessing institutional pools of capital for private equity placements, arrangement of debt, taking companies to the capital markets, mergers and acquisitions, corporate restructuring and cross border transactions. He has several years of experience in audit and accounts, taxation, corporate finance, capital markets and corporate and economic laws.

Gautam was with Modern School for the last two years of his schooling. A high performer at school, he was a member of the school athletics team and a prefect. He graduated in Economics Honours from St.Stephen’s College and subsequently qualified as a Chartered Accountant from ICAI, India. Gautam has been a management consultant for +30 years with premier consultancies that have included A F Ferguson & Co., Rummler-Brache Group and Strategic Alliance Management Services P Ltd. (SAMS). He leads SAMS nationally and directly oversees their HR practice which is focused on non-profits.